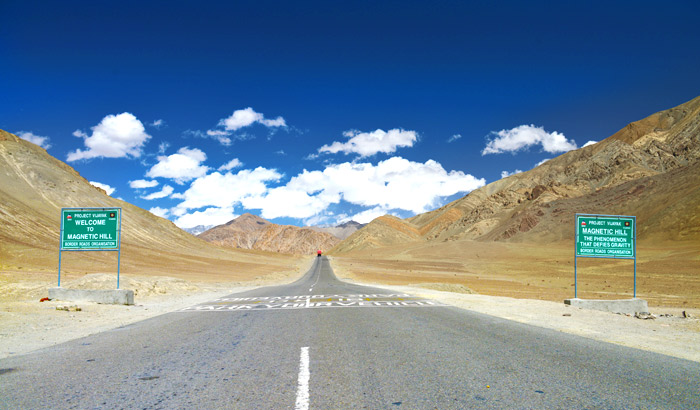 I was on the way to complete my road trip of Leh-Ladhak and while I was driving to Kargil from Leh, I came across Magnetic Hill which say’s :

Magnetic Hill, The phenomenon that defines gravity.  Park your vehicle in the box marked with white paint on the road

People believed, behind this mysterious phenomenon is an unknown magnetic force that is so strong that it can pull any cars / bikes uphill (My bike, was cruising at 10 km/h after initial hiccups ). Some of my pilot friends in airlines say that they are instructed to fly their aircraft with increased altitude in order to avoid magnetic interference in this region (I don’t know how true is this). Every tourist driver that passes through here would kill the engine to let them  experience how the car still kept moving without any power to move them in uphill. Some people are not aware of Magnetic Hill and just pass through here but the ones who do know stop their cars to verify whether what they heard was true or merely a made-up tale.

No matter what I was tempted to do some fact check with my bike over Magnetic Hill so I went ahead and killed my engine to test this phenomenon and here I am feeling the power of gravity with a wind blowing around me .

Some people are not aware of Magnetic Hill and just pass through Magnetic Hill but those who know about it, they normally stop their cars to verify whether what they heard was a true or made-up tale.

The layout of the area and surrounding slopes creates an optical illusion that the downhill road is actually an uphill road. Objects and cars on the hill may appear to roll “uphill” in defiance of gravity when they are, in fact, rolling downhill
https://en.wikipedia.org/wiki/Magnetic_Hill_(India)